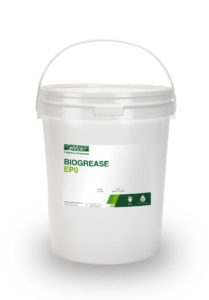 BIOGREASE EP0 is designed for use in sensitive marine environments and can be used in a variety of marine applications which demand a semi-fluid NLGI 0 grease, primarily for rudder stocks (centralized lubrication systems) and propeller hubs and caps.

Instructions for use
Storage and shelf life

BIOGREASE EP0 and its components have been evaluated by independent laboratories.  Using these test results, Vickers Oils has determined that it meets the VGP definition of an Environmentally Acceptable Lubricant.

BIOGREASE EP0 has a biodegradability of greater than 60% in the 28 days OECD 301B test and is proven to be non-toxic in the marine environment based on the following results:

BIOGREASE EP0 meets the detailed ecological definitions and requirements laid down in the 2013 Vessel General Permit (VGP) published by the US EPA in March 2013.

Vickers Oils, its officers, employees and agents assume no responsibility and shall not be liable to any person for any loss, damage or expense caused by reliance on the information or advice in this document or howsoever provided, unless that person has signed a contract with Vickers Oils for the provision of this information or advice and in that case responsibility or liability is exclusively on the terms and conditions set out in that contract. Products should only be used for the applications specified. The supplier cannot accept responsibility if they are used in any other applications.